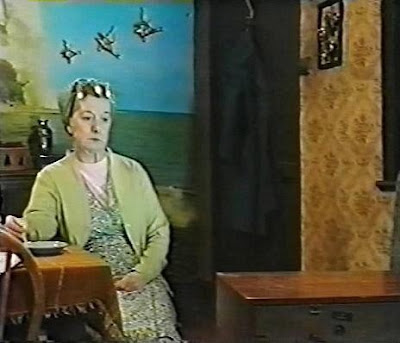 Hilda Ogden (Jean Alexander) has a night in with the telly and the ducks.

Hilda's famous ducks, taking wing across her mural (sorry, chuck, I mean muriel), were one of the most familiar sights in Coronation Street from the late 1970s to the late 1980s. One of them was crooked (Jean Alexander always checked this personally before filming commenced) and they looked absurd.

One of my favourite duck-related incidents occurred in the early 1980s, when Stan (Bernard Youens) was studying the racing form in one of the tabloids.

A duck fell off the wall.

Stan looked up briefly at the sudden loud noise but then, with that commendable lack of interest he always displayed regarding matters which did not involve beer, betting or fags, returned to his studies without bothering to find out what had made the noise.

How I loved Stan!

The ducks in the Ogdens' living room had previously been seen at No 11, home to Elsie Tanner (Patricia Phoenix), during the show's earliest episodes (including the very first), and Lorna has written to ask:

Surely Hilda had not acquired the ducks from Elsie? And why did one of them always point downwards?

Of course, Hilda would not have accepted Elsie's cast offs, Lorna, you're absolutely right.

In 1987, Hilda wondered whether to give her ducks to Kevin and Sally Webster (Michael Le Vell and Sally Dynevor) when they moved into the Corner Shop flat.

But, to Sally's secret relief, she decided not to as they had belonged to her Auntie Aggie and were of great sentimental value.

So, in the story-line, Hilda's ducks had never graced Elsie's wall.

As for the crooked duck, I'll let you into a little secret.

My great granny had a flight of birds, similar to Hilda's ducks, winging their way across her chimney breast, for many years.

When she died, my mother inherited them, and in 1997 she bequeathed them to me, being the oldest of her children.

By my family's standards (dirt poor) these were real heirlooms.

I was not impressed, particularly as Mum expected me to be delighted with them, and hang them in my lounge. This I finally did (anything to keep the peace and, in the interests of continuing peace, they're still there).

Some of my more uncharitable friends called my house "The Oggies" for a while, but the thrill of that soon wore off for them.

I was interested to note that each of my great granny's flying birds had a piece of stiff, thick wire attached to the back to enable them to be hung. It's my belief that a little tampering with the wire could easily cause one of the birds to adopt a downward course.

And I believe that this was what was done, to great comic effect, with one of Hilda's ducks!
Posted by Drew at Saturday, September 11, 2010

We're taking a look back at the first three decades of the English soap opera Coronation Street.

We have newspapers and magazines.

We have screen caps.

So, if you space-hoppered about whilst worrying over Elsie and Len in the 1960s, almost dropped your klackers as Ernie Bishop got the bullet in the 1970s, and got your Rubik's Cube in a right old twist over the conflagration at the Rovers in the 1980s, then this is the blog for you!